Boomtown was briefed by Circular Health, a medical practice, to create an engaging campaign that would raise awareness around the overlooked yet deadly medical condition known as Hypertension.

Hypertension is often disregarded and overlooked, even though it was identified in the World Health Organisation report as the number one contributing factor to deaths around the world. An estimated 40% of people over the age of 25 have hypertension, 75% of which are untreated.

Circular Health wanted a piece of communication that educated their patients about the risks of hypertension and the importance of knowing their score.

To educate the public on this fatal ‘silent killer’, as it is nicknamed, the Boomtown creative team created a three-dimensional interactive poster with a blood pressure pump. When the blood pressure pump was used, the poster slowly filled with fake blood revealing a hard-hitting message.

The awareness campaign was carried out at Circular Health, where nurses performed free blood pressure tests and provided information about the condition.

“Few people understand the health risks that hypertension holds and that is why it is important to bring attention to it,” remarks Boomtown MD and Executive Creative Director, Andrew MacKenzie.

“The message which appeared in fake blood can be read from top to bottom or bottom-up. By being able to read the message in reverse, the opposite meaning becomes true and reflects the reversible nature of hypertension,” adds MacKenzie.

The creative team behind the work included:

“During the campaign, over 85% of patients who were tested didn’t know that the effects of hypertension can be reversed. This figure reveals how little people know about hypertension,” remarks Dr Nicolas Thackwray, Circular Health.

“When you consider that 40% of people over 25 suffer from hypertension and that 50% don’t know they have the condition, it’s easy to see why it’s a silent killer.” 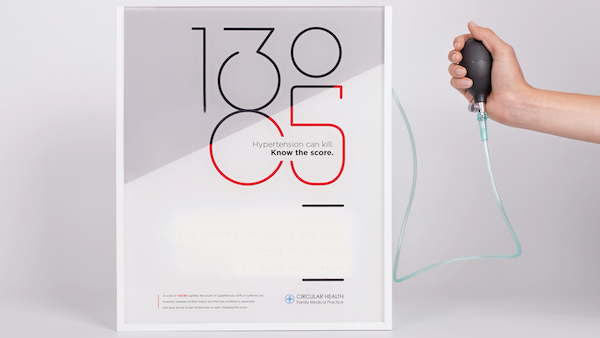 New Eskom CEO has a mammoth task ahead of him
Next Post: Andre de Ruyter – Eskom’s new group chief executive