You are here: Home / Business / MyPR / R40m Fort Gale Junction a vote of confidence for investment in the Eastern Cape

R40m Fort Gale Junction a vote of confidence for investment in the Eastern Cape: 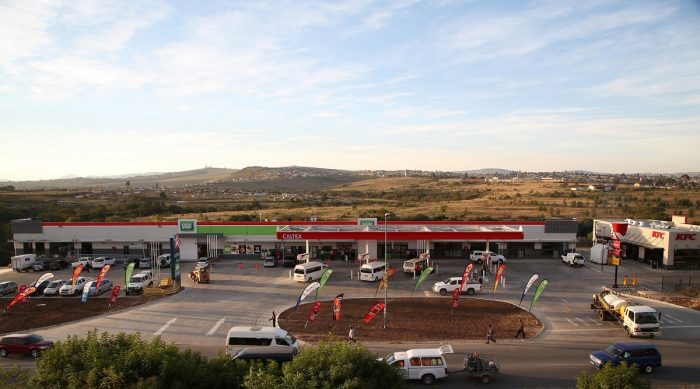 INVESTMENT CONFIDENCE – A R40-MILLION CONVENIENCE centre and service station development launched in Mthatha represents a vote of confidence in the provincial economy and improved services and facilities on the busy route connecting the Eastern Cape to KwaZulu-Natal, Lesotho and inland. Photo: Rob Pollock

MAY 29, 2017 – A R40-MILLION CONVENIENCE centre and service station development launched in Mthatha last week [SUBS: Thursday 25 May 2017] represents a vote of confidence in the provincial economy and improved services and facilities on the busy route connecting the Eastern Cape to KwaZulu-Natal, Lesotho and inland.

During his address, Cllr Zozo commended local developers Ndamara Investments for their contribution to the economic growth of the area. He urged the audience to consider and support other investment opportunities in the region such as the proposed development of a new town in the Coffee Bay area.

The complex combines a new shopping centre with a revamp of the long-standing Fort Gale Motors Caltex service station, and is a key part of a business strategy to invest in “bringing world-class services and facilities to traditionally under-invested or forgotten areas” of the province, says Caltex Eastern Cape Marketer (CECM) chief executive Clive Berlyn.

The new development is a combined effort of a group of committed Eastern Cape investors – CECM, Prince Mzwandile Maraqana of Ndamara Investments, and the Novate Group – who together invested R40-million in upgrading Fort Gale Motors into a state-of-the-art fuel service station and developing the new Fort Gale Junction shopping centre.

Ndamara Investments has been the landlord of Fort Gale Motors since its establishment in 1989, and Prince Mzwandile said he was “proud of the latest evolution of the site into a retail hub that brings services and convenience to local residents as well as creating jobs and economic opportunities”.

Berlyn and his business partner, the late Richard Ndungane, had a long track record in business in Mthatha when they founded CECM in 2003 to acquire the master franchise for the Caltex brand in the Eastern Cape. CECM would continue to invest in the province, said Berlyn.

CECM is a 100% Eastern Cape owned, and majority black-owned, company, that has invested over R400-million in the past decade in acquiring and upgrading the more than 100 service stations now in its network across the province.

Berlyn said CECM had made at least half its investments in acquiring and upgrading service stations in the neglected eastern part of the province.
“These have proven to be sound investment decisions, not just a feel-good exercise,” Berlyn said.

The upgrade of the service station has created 18 new jobs, while Fort Gale Junction is expected to create more than 250 new jobs once the centre is fully tenanted, said Jo Berlyn of the Novate Group, which operates Fort Gale Motors.

The partners are optimistic that the upgrade of the service station and the additional shopping and facilities will position the site as a flagship in CECM’s network of more than 100 sites across the Eastern Cape, restoring Fort Gale Motors to its former glory when it traded the largest volumes of fuel in the Caltex countrywide network in the early 1990s.

Fort Gale Junction is expected to attract a mix of local businesses and national brands as tenants, with a KFC outlet already operating; while Fort Gale Motors has been transformed with the latest fuel technology and revamped layout to ensure easy access and efficient service.

A one-stop hub for local residents and travelers, the revamped Fort Gale Motors now hosts a FreshStop convenience store which not only “boasts the best fresh fruit and veg in town” but also include a Grill to Go, Hooked on Fish and Hot Dog Bar. “In addition, we will also be adding a Seattle Coffee bar to the mix within the next few weeks” said Jo Berlyn of service station operator Novate Group.

In his address at the Grand Opening, FreshStop Director, Joe Boyle said: “FreshStop at Caltex Fort Gale Junction is the 254th store in the national franchise network, the 29th store to open in the CECM area and the 2nd in Mthatha. FreshStop is proud to continue its relationship with Clive and his team, Sean and Joe of Novate, Ash and Wela from Chevron, and now, Goodmore and Nelly from Fort Gale Junction.

Our partnerships are bonded through family values and our ‘One Team One Dream’ vision gets stronger as our Brands continue to integrate. The two FreshStop at Caltex sites in Mthatha signify the city’s growth strategy to bring industry and world-class leaders and managers to the Eastern Cape. We are very pleased to be involved with this world-class fuel and convenience centre and look forward to continuing the journey to success.”

Fort Gale Motors was part of the beginning of the CECM success story: it was owned by Clive Berlyn, now chief executive of CECM, when the company was formed in 2003 and acquired 34 service stations in the eastern part of the Eastern Cape as the first Branded Marketer territory in South Africa awarded by Caltex parent company Chevron. The company has since expanded into the west of the province and invested over 400-million in acquiring and upgrading the more than 100 service stations now in its network.

CECM is the largest of 11 independent Caltex Branded Marketers in South Africa both by number of outlets and volumes of fuel traded, and the largest in Chevron’s Africa, Middle East and Pakistan region.